Mazuri Exotic Animal Nutrition is proud to partner with various rescues, organizations and sanctuaries around the world. These organizations dedicate their efforts and resources to the safety, preservation and health of exotic and endangered animals.

St. Augustine Alligator Farm is a Florida institution. Founded in 1893, the zoological park has an extensive history in exotic animal husbandry and serves as an essential contributor to research and worldwide conservation efforts.

Species Survival Plan (SSP) programs began in the 1980s as a collaborative effort to conserve and maintain healthy populations of selected species. The St. Augustine Alligator Farm is instrumental in the SSP programs of 27 different species, including reptiles, mammals, and birds, most of which are critically endangered.

Critically endangered species face an extremely high risk of extinction in the wild and the SSP programs at St. Augustine help combat the declining numbers. The conservation and research programs help caretakers and wildlife experts better understand the habitats, behaviors, nutrition, and general physiologies of the various species. 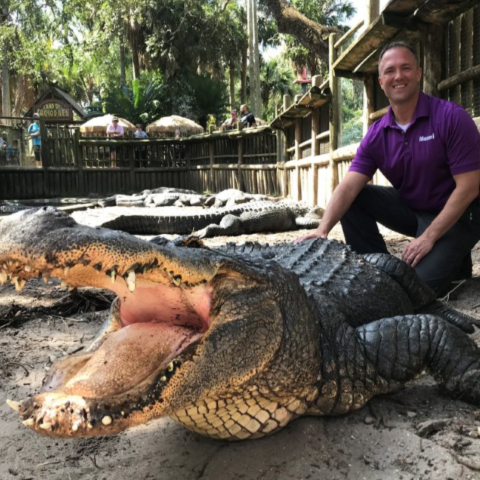 Balanced diets are vitally important for species participating in SSP programs. Balanced diets and nutrition contribute to reproductive ability and success. Mazuri® is proud to have partnered with the St. Augustine Alligator Farm a few years ago during the development of Mazuri® Crocodilian Diets.

Crocodilians aren’t picky eaters, but they still need a balanced diet to stay healthy – especially the breeding species participating in SSP programs. The St. Augustine Alligator Farm and Mazuri® worked together to create alligator biscuits – a floatable diet used for training and visitor interaction. While some crocodilians may occasionally eat some vegetation and berries, they are truly carnivores, with fish and other prey species as their primary diet. The alligator biscuits may be used as the sole source of the diet, but may also be fed in combination with other natural feedstuff

Mazuri® continues to work with organizations like the St. Augustine Alligator Farm and with other researchers to develop and improve diets for a variety of species including alligators.

After more than a century, the St. Augustine Alligator Farm continues to instill appreciation and understanding of crocodilians and other wildlife through education and conservation. For more information, visit www.alligatorfarm.com.

Want to learn about Mazuri’s industry partnerships? Check out this article about the Center for Great Apes.